So, I'm looking to move The Pursuit. New location:

All this, just to be able to post pics from my Iphone.

It hasbeen almost two years since our town's little, independent grocer went out of business. At the time, his demise was a shocking event for those of us who visited regularly, because he was always busy, had good stuff (gawd, the lamb was the best!), and he would do little things like keep an account and send you a bill at the end of the month. I'm told this started because in some homes the staff did the shopping, and could just put everything on account and didn't have to carry cash. I wouldn't know about such things.

Anyway, our little grocer decided to expand, took on enormous debt and promptly failed. His store, which was in the middle of town, stood empty, like an open wound for the past two years.

That is until today! Today, a new era dawns as Fresh Market is opening in the old guy's place. Now I don't know much about FM, but it has to be better than what we've been limited two during the last 24
months! So, my car is positined at the station, and when I get off the train tonight at 7:16, I will be off on yet another culinary adventure. Wish me luck my little gastronauts!

Posted from Blogium for iPhone

Posted by Pursuit at 5:05 AM No comments:


I don't know about anyone else, and I'm sure this is a sign that I have serious "issues", but I just found this creepy. Am I nuts?
Posted by Pursuit at 5:48 PM 2 comments:

Just finished another session of Yoga X. Wow! The whole routine is 90 minutes, which is really hard to fit in once a week - yes, I know that sounds crazy - but man, when I do I just can't feel better. Off now for a little dinner.
Posted by Pursuit at 5:26 PM No comments:

So, O'Bama is now appearing iny dreams! How's this?

I have this dream that O'bama has started a jobs program for inner city yoot. His idea is that they should work as garbage collectors in the suburbs. For some reason, I have to go see how this program is going, so I leave my house and head down to the corner o our street. Sure enough, there is a big ole garbage truck and as I approach, our pres hops out of the cab, dressed in suit, tie, overcoat and scarf. There are a couple black inner city kids on the back and he instructs them top hop off the tuck and go get the garbage. As I approach, he enthusiastically waves and say's hi, while I turn to my companion and say, "I don't know. Is this really the image he wants to craft?"
Posted by Pursuit at 3:48 AM 3 comments: 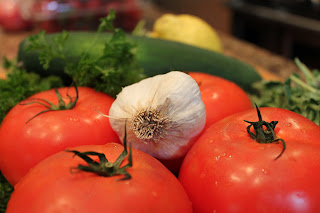 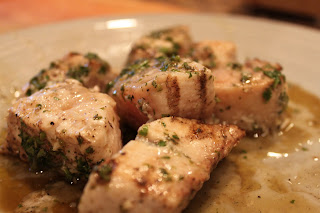 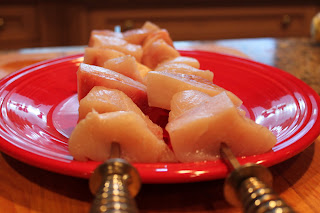 So, Sunday dinner this week was something a little light. I've been wanting to do a little gazpacho and grilled fish, and I thought, "why not tonight?" And so it was. Still working the photography thing with my new camera, but these turned out rather well. I also did one of the gazpacho ingredients, but it seems to have dropped off. I'll see if I can add it later.

As for the fish, I did it real simple like. Started with some lovely looking swordfish, used ample salt and pepper (one of the secrets of great grilling) and did for five minutes over a medium hot fire. Usually, I'll add a little alder wood with fish, but for Sunday I kept it real simple. When the fish was done, I gave it a light brush of olive oil, oregano, parsley, lemon and garlic and served. Just perfect.

Update: Gazpacho ingredients added. Man, that was a fine soup!

Posted by Pursuit at 6:36 PM No comments:

Starting off another round today. Day One: Chest and Back is in the books. Now off to Miss Jenny with Mrs. P for some Pilates
Posted by Pursuit at 6:02 AM 2 comments: